FiretickDB
9 postsMember, Battlefield 3, Battlefield 4, Battlefield, Battlefield 1, CTE, BF1IncursionsAlpha, Battlefield V Member
November 13, 2018 7:07PM edited November 2018
I would like to preface this by saying that this is entirely my opinion, but I found that this opinion is shared by few other people when I asked around. It seems like Grand Operations (GO) in BFV just doesn't compare to BF1 Operations. Skip to the paragraph about modes if you want my main gripe.

For starters, BF1 Operations had a better sense of immersion. You were given the thoughts of various soldiers from their respective nations in their languages, and it didn't get old. When you had to charge forward, you would hear whistles blowing as men screamed and charged forward into a storm of gunfire and bullets, there was no better feeling. You don't really get this feeling in BFV, but it's a minor complaint.

Now another problem with GO is that you're not really fighting for something, by this I mean that back in BF1 Ops, you had to attack or defend across several sectors in a map. There really was a tangible sense that you were fighting for something. If you attacked, you needed to attack strong so you can move onto the next map or win the Op, if you defended well enough you could successfully stop them from moving onto the next map, or even win the op, this gave a motivation to fight since there were serious consequences. With GO, the mode will shift regardless of the previous result, "We successfully defended, but let's retreat anyway", the only affect I notice is something along the lines "enemy reinforcements delayed" or "enemy tickets reduced". I wonder if they'll let a GO end if the defenders stopped the attackers (at least for modes like Breakthrough or Conquest Assault, which leads to my next point)

The absolute biggest problem with GO are the modes. With BF1, the absolute shining star of that game was Operations, now called Breakthrough. In that mode the attackers had 3 battalions to attack across several sectors across several maps, while the defenders had to stand their ground and hold the line. This, in my opinion, is the best mode to ever be created in a Battlefield game. It essentially forces everything Battlefield into one area. You had defined frontlines that created protracted battles and gunfights, which forced the chaos of all out warfare that Battlefield excels in. You had artillery raining down on positions of either sides, as vehicles fought to gain an advantage with players having to fight ferociously either trying to relentlessly push forward or desperately try to hold the line. This is probably one of my favourites modes to ever play in any videogame ever, and it's the reason why have I have 900+ hours in BF1.

In GO, it essentially plays as glorified mix mode/map playlist. Some of the game modes just don't work well in this attack/defend setting, the primary culprit is Conquest as the pace is much slower and the engagement are far and few between, and it essentially plays like whack-a-mole where you just run to the next flag not owned by your team. The rounds are too short in my opinion, I much preferred the length of BF1 Operations. The different "days" in a GO don't make you feel like you're fighting on the same map instead the days are treated as distinct maps, by this I mean that any destruction or fortifications from one day does not transfer over to the next day on that same map, which is something I am surprised by since fortifications and destructions lends itself brilliantly if you let players develop them over an extended period of time. I feel like fortifications has some great long term in-map gameplay effects if they were allowed to be developed, rather than something short term. I will say that certains modes do work really well with GO, namely Airborne, Breakthrough and Frontlines.

I understand the devs are trying to get people to play multiple modes, and they are trying to cut down the round lengths since I'm guessing either casual players didn't like the length of BF1 Operations or the devs themselves think the length is excessive.

BF1 Operations was the reason I really enjoyed BF1. I do not get the same feeling with BFV. I will wait and see if the Breakthrough mode in BFV similar to BF1 in length and intensity. Again this is just my opinion, but I wanted to voice it and see if other people felt the same. Thank you for reading.

EDIT: Another problem I've noticed is that it's possible to win (or lose) the Grand Operation even though you lost (or won) the first two days. Makes the first couple of days seem pointless. As others have iterated in this thread, it takes away the sense of accomplishment when the you win or lose but the operational narrative draws it up as a loss or win. 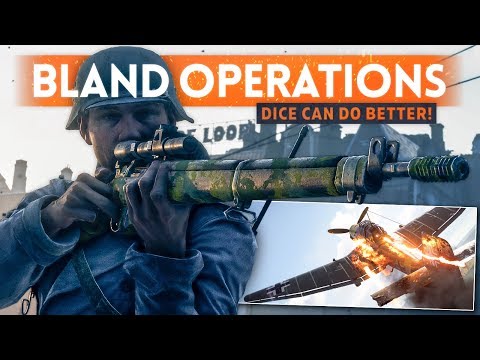