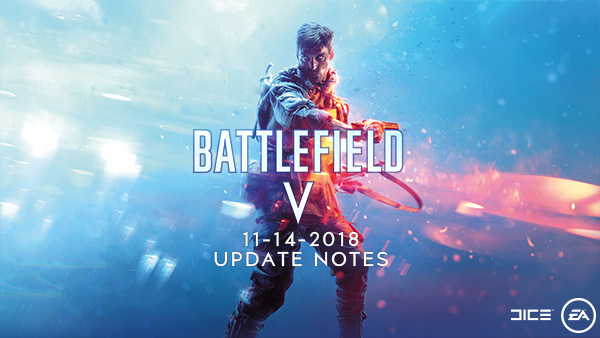 We're proud to announce that the Battlefield V 11-14-2018 update is now live! Below you will find the full update notes, how to enable DXR on PC, and a link to the new Battlefield V Update Notes archive on web where all update notes will be published going forward.

This is a smaller update that resolves a few stability issues that we’ve identified as well as a squishing a few bugs related to game modes.


How to Enable DXR for PC

If you have an Nvidia video card capable of utilizing their ray-tracing technology, today you'll be able to dive in for the first time with this amazing tech.

First, you'll need to ensure you've installed the Battlefield V 11-14-2018 Update, and have the latest Nvidia drivers. Additionally, you'll need to make sure you've installed the latest Windows 10 Update - "Windows 10 October 2018 Update". If you have automatic updates turned on for Windows, you should have it installed. If you don't have automatic updates turned on, you can manually check for the update and download it here.

Some details to help you get started:

You will find all past and current Battlefield V updates archived here.

Post edited by PartWelsh on May 2019
6
Reply to this topic
This discussion has been closed.