Hello, Battlefield™ V* players, and welcome to the June update!

This is a larger update that adds content for Tides of War and the Armory, as well as several quality-of-life improvements and bug fixes. The most noteworthy of our issue fixes are those addressing performance when firing or getting fired at, which in some cases could cause frame spikes. We’re bringing tweaks to weapons, vehicles, and soldier behavior, too.

The full notes are listed below. You can also jump into the notes on the Battlefield™ Forums and Reddit to join the discussion and keep the feedback coming. 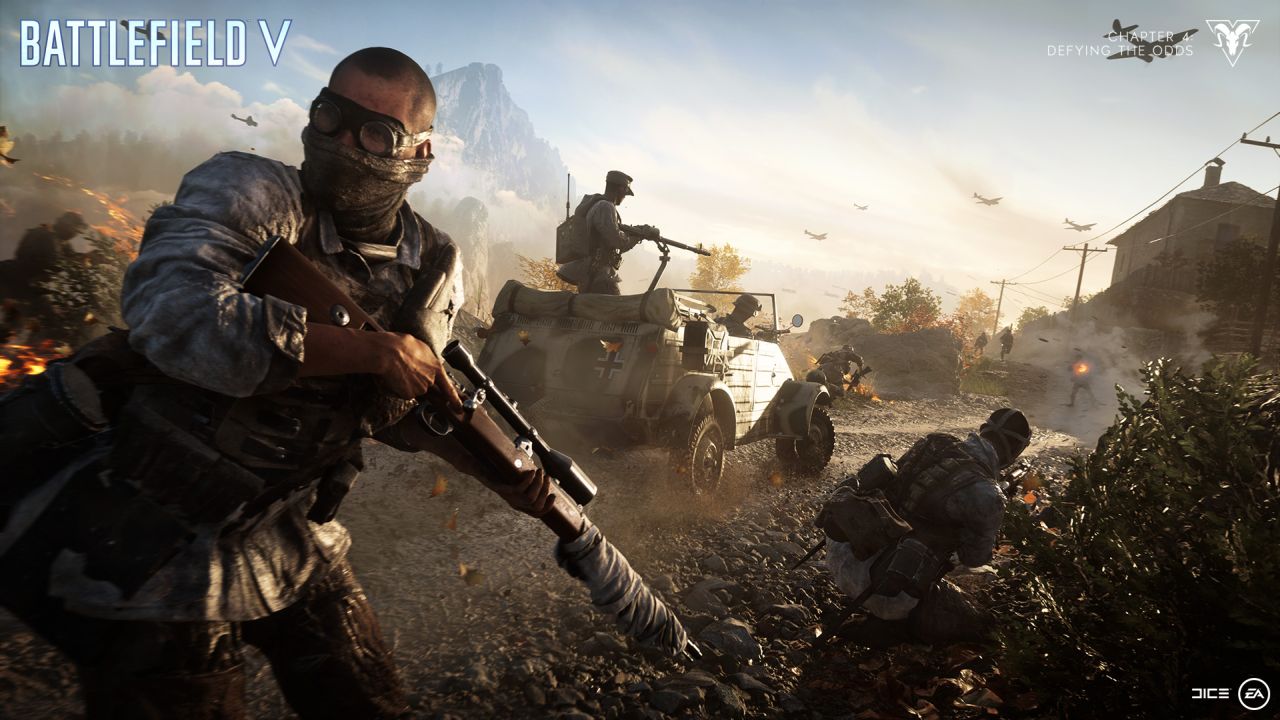 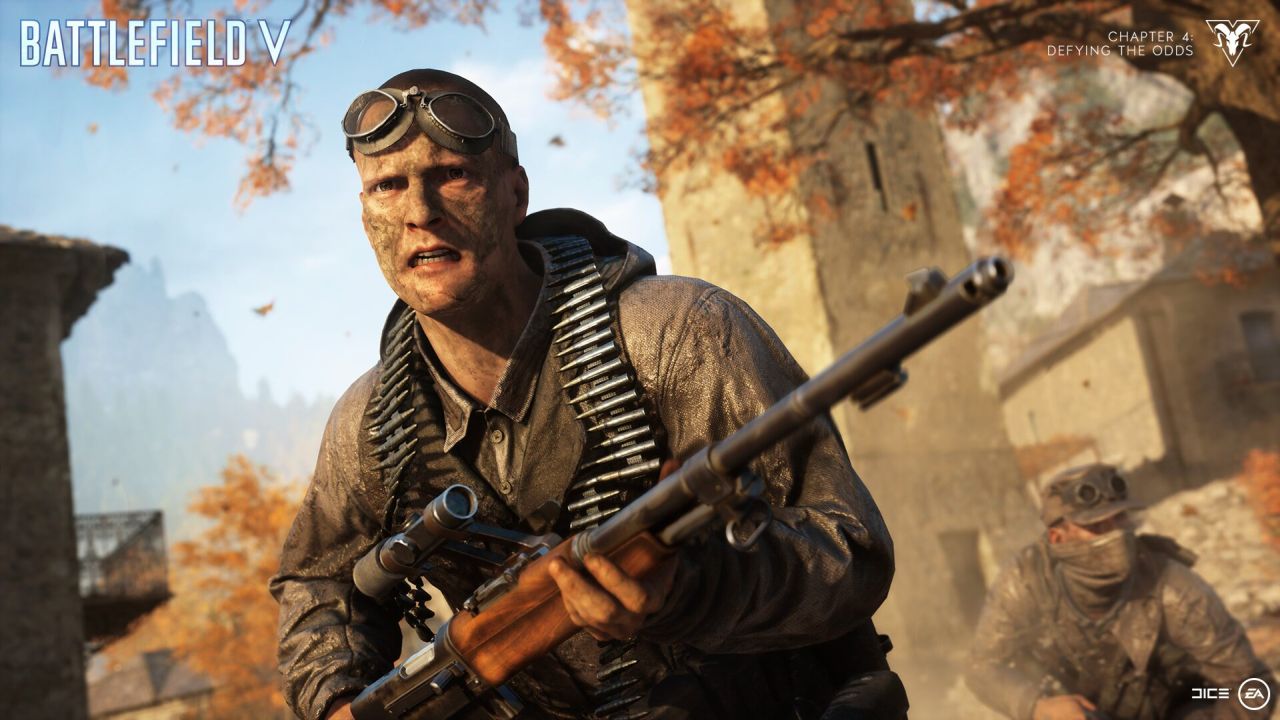 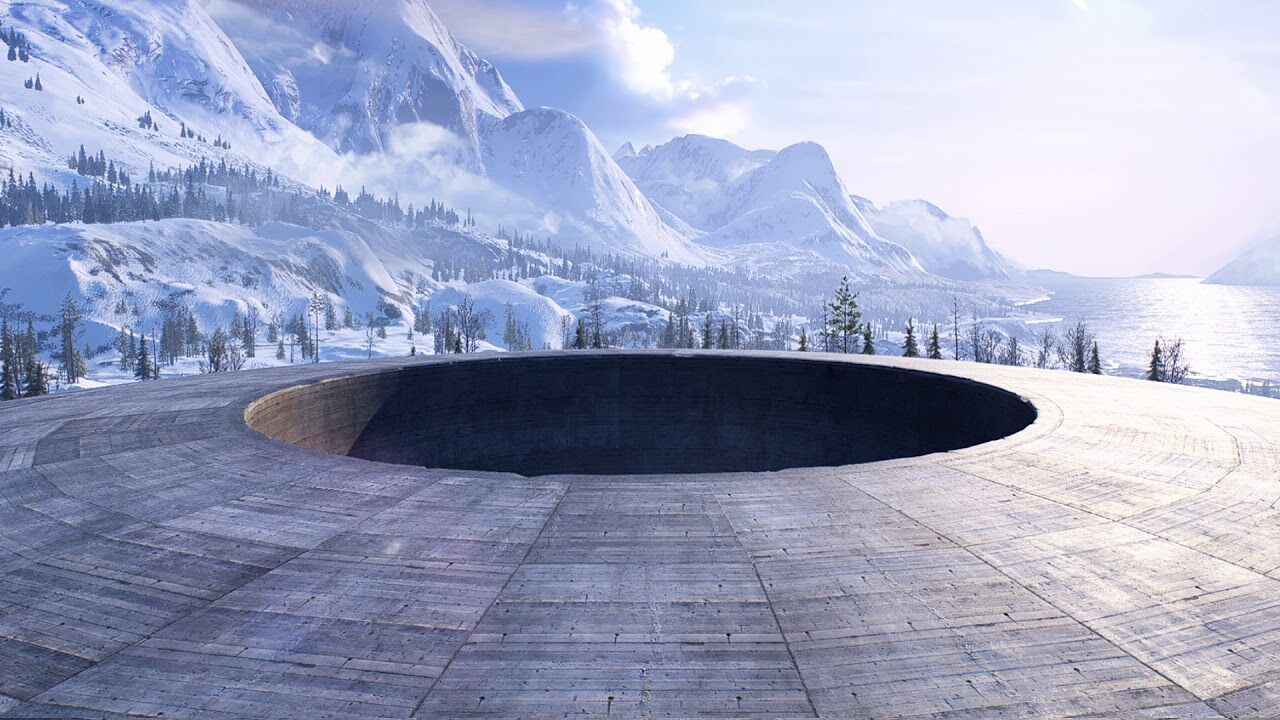 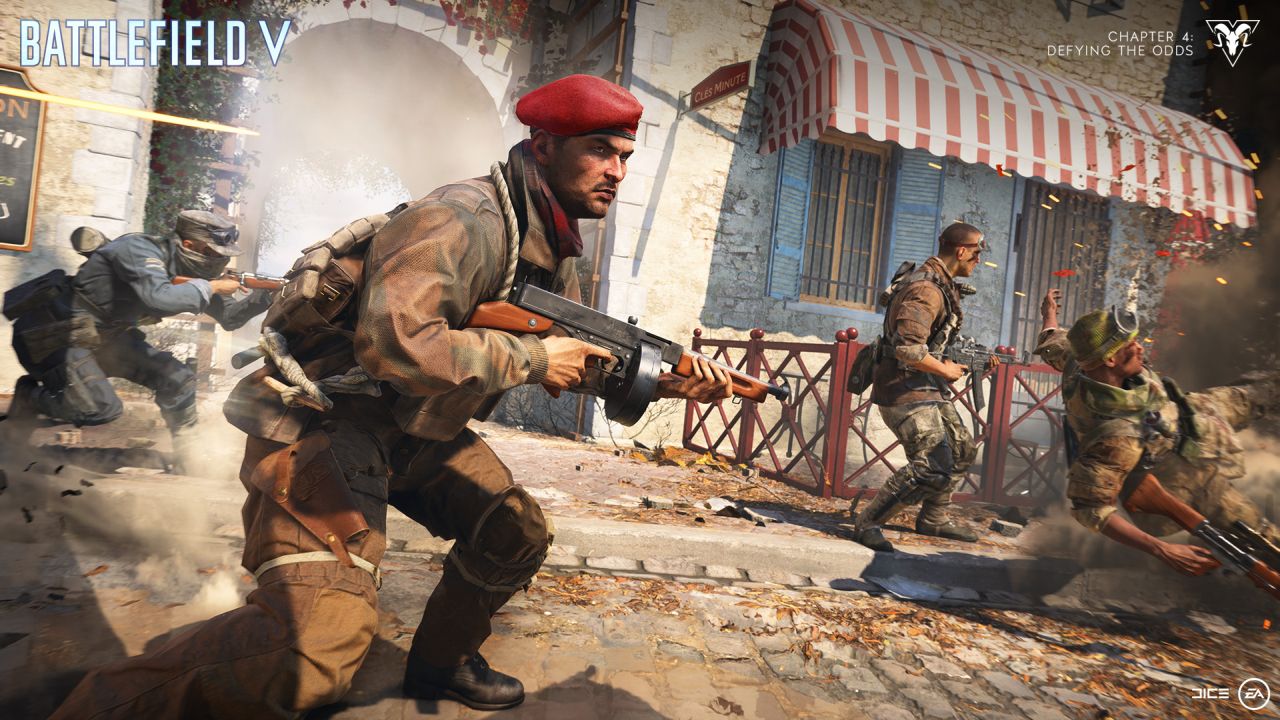 After looking at Team Deathmatch, we’ve made the decision to change the layouts on a few maps. The goal is to increase intensity and give players a more consistent experience by reducing the size of combat areas and focusing on specific map locations.

We’re very interested to hear your feedback on these changes and whether you prefer the new or old layouts.

Aerodrome
The first map we wanted to change in Team Deathmatch was Aerodrome. The old layout had interesting areas, but it was a bit unfocused and often ended up with players running back and forth, not finding fights. The new layout revolves more closely around the hangar.

Devastation
Devastation had the biggest Team Deathmatch layout. We’ve decided to reduce it as we want Devastation to embrace its close-quarter flavor. The new layout takes place in the run-down sections at the mall. This should mean fast-paced infantry mayhem!

Fjell 652
With the new layout of this map, we center around the village. The old design saw much of the fighting happening in the open, between points of interest. With this new approach, the fights should become more interesting and fast-paced.

Narvik
This vista had a good Team Deathmatch design, but it was slightly too big and made some of the spawns frustrating. We have removed the southern part of this layout to create a more intense experience. 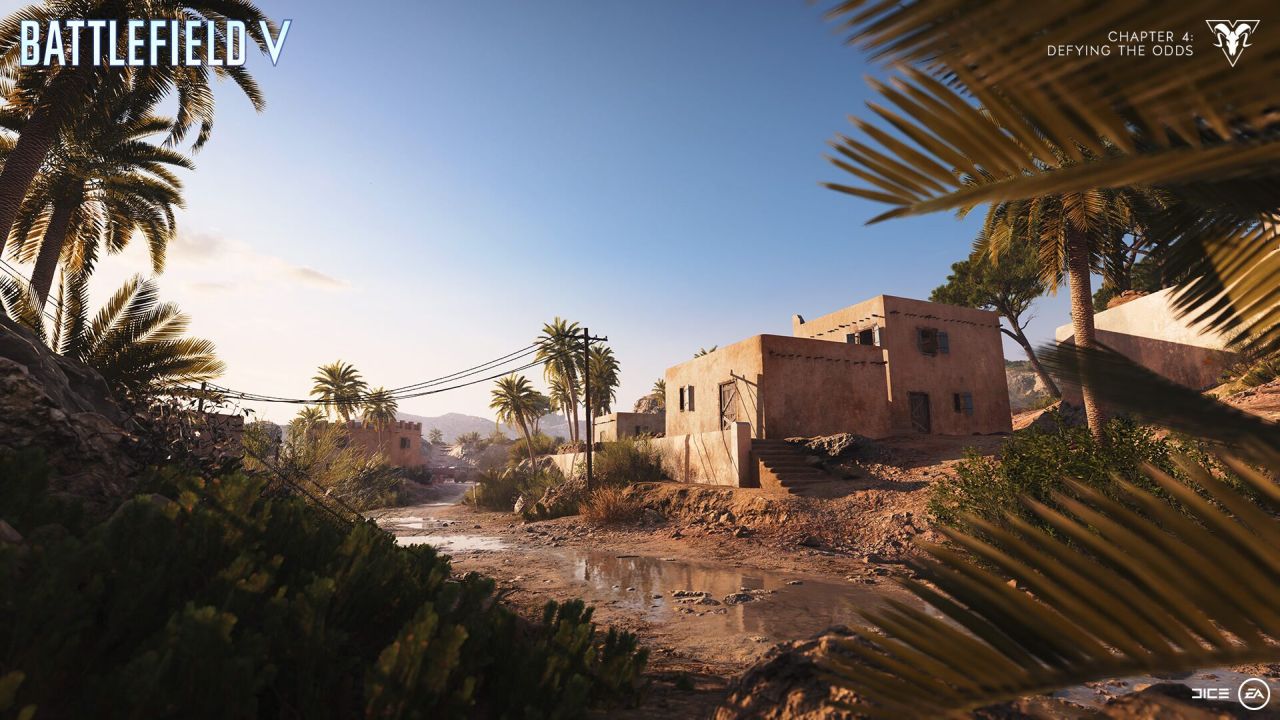 For this patch, we’ve also looked at Frontlines. It’s one of our more tactical medium-scale modes, bringing very interesting and dynamic rounds as teams shift between attacking and defending. Many of you have voiced concerns and feedback about the mode (you know who you are), which has been very helpful.

We’ve gone over the mode and identified these areas that we wanted to improve with this patch:
Let’s go over them in detail.

Round Length
Previously, the Frontlines game mode timer was paused during shifts between objectives. We’ve determined that the massive variance of average round timer (and how much you can trust the HUD’s timer) isn’t worth it, and the pause function has been removed. This was originally added to make sure the round wouldn’t end during a transition.

Objective “Ping-Pong”
Some maps have had quite large distances between flags. Combined with a relatively short capture timer, this has created scenarios where an advancing team isn’t able to get to the next objective before it’s been captured by the defenders. We’ve tried to reduce this by adjusting some layouts, by improving the accessibility, and by increasing and normalizing capture times. The latter used to vary a lot depending on how many flags the map had, but that has been toned down.

Capture times have changed like this:
Accessibility
Frontlines has had some problems with understandability. A lot of that is related to knowing where you should be at any given time – and that in turn is related to the “locked objective” mechanic. When a flag is captured in Frontlines, the next flag in order appears with a lock timer over it, and when it expires, the flag is activated. This mechanic is, however, unique to Frontlines and can be hard to understand for newbies.

With this update, we’re changing the mechanic. When one flag is captured, the next is immediately activated and visible, and the lock icon appears next to it instead. You can go to the flag as usual, but you cannot start capturing it before the lock has disappeared. Hopefully that will lead to new players advancing on the next objective even if they do not yet fully understand the rules of Frontlines.

Vehicle Spawning
On larger maps, spawning in a tank meant you set yourself up for a potentially very long drive. We’ve now added movable tank spawn positions, which means that you should spawn closer to where the infantry spawns. 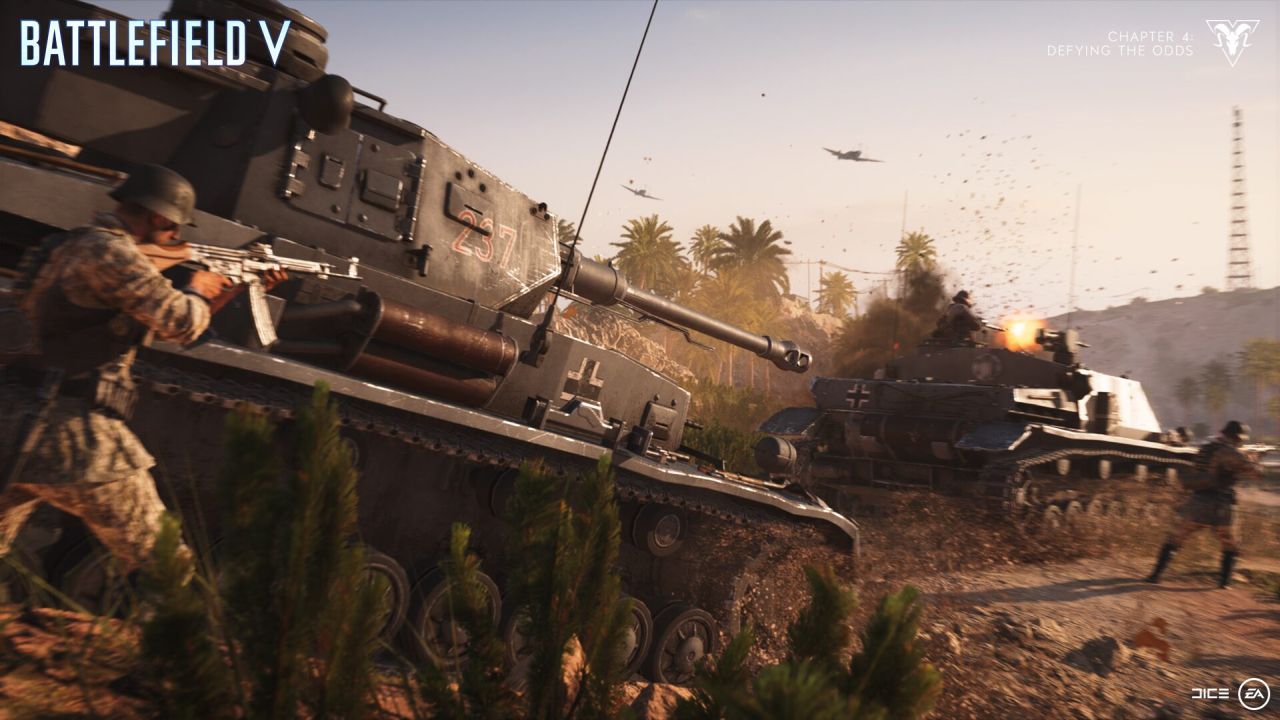 You can also reach out to our Battlefield multiplayer producer David Sirland and Battlefield LIVE producer Jaqub Ajmal on Twitter if you have any further topics that you would like us to write about in future blog posts. You can reach them on Twitter @tiggr_ and @jaqubajmal. Also, you can reach Jaqub on Weibo: @jaqub.

As always, we hope to see you on the battlefield, and we look forward to the journey that Battlefield V will take us on through the Tides of War!

– David Sirland and Jaqub Ajmal, on behalf of the teams at EA and DICE.

Enter mankind’s greatest conflict now with the Battlefield™ V Deluxe Edition or Standard Edition on Xbox One, PlayStation®4, and PC. Play the full game with Origin Access Premier or try it first for 10 hours with EA Access or Origin Access Basic**.

*PERSISTENT INTERNET CONNECTION MAY BE REQUIRED TO PLAY.
**CONDITIONS, LIMITATIONS AND EXCLUSIONS APPLY. SEE ea.com/ea-access/terms AND origin.com/store/origin-access/terms FOR DETAILS.

This announcement may change as we listen to community feedback and continue developing and evolving our Live Service & Content. We will always strive to keep our community as informed as possible. For more information, please refer to EA’s Online Service Updates at https://www.ea.com/service-updates.