Tomorrow, we’ll be deploying a Hotfix across all 3 platforms to address critical issues that emerged following last weeks update. In this post you'll find a summary of what we've been able to fix, and what we're still working on, the patch notes in full from Jaqub and the development team, and detail on when to expect the update relative to your platform and timezone.

This update looks to significantly reduce the number of stability issues experienced on Xbox (Edit - Please see this update), and rectify the Hit Registration issues that have been experienced across all platforms. During testing, we discovered that Hit Registration wasn’t only impacting Planes, but all aspects of combat in the game, and this update should restore it back to a healthy state.

In addition to this, we were also able to include a simple fix that restores functionality to Face Paints. This was a quick configuration change that requires a client side update, but one that we were able to both identify, implement, and verify with minimal effort so we’ve opted to include it here rather than save it for a future update.

We’re still investigating potential fixes for the ‘Invisible Soldier’ issue that appeared with the recent updates. Originally we believed that this was caused by faulty customization options, however after extensive testing we’ve learned that this is a purely random occurrence that exists on the client side only, and whilst harmful to the gameplay experience, it’s something that we’re confident isn’t something that’s able to be intentionally exploited by players.

We believe that this is caused by an engine issue that prevents the client from rendering the needed texture files, and isn’t consistent across all players on the server. Whilst it may be that you’re attacked by an Invisible Soldier, it’s every bit as likely that your Squad Mates are indeed seeing the opposing player correctly, and better able to identify the threat and engage. This remains a priority for us to resolve in our next update.

The stability issues affecting Al Sundan on Conquest have otherwise been resolved, however through fixing this we’ve discovered a graphical corruption (artifcacting) that we’re not happy with. We’re continuing to work on this one and will keep you updated this month. This won’t impact our intent to deliver Marita to you this month, and we’re working to get you out on the full version of Al Sundan as soon as possible.

On behalf of the Battlefield team, thanks for your patience whilst we resolved these issues. Updates on additionally tracked issues are available here.

This update is a smaller Hotfix which addresses a few critical issues that were introduced with the previous update.
Change list:
Please note that we are aware of additional issues that you have reported, and we have a list of issues that we have prioritized here.
Jaqub Ajmal Producer, Battlefield V (Twitter: @jaqubajmal) 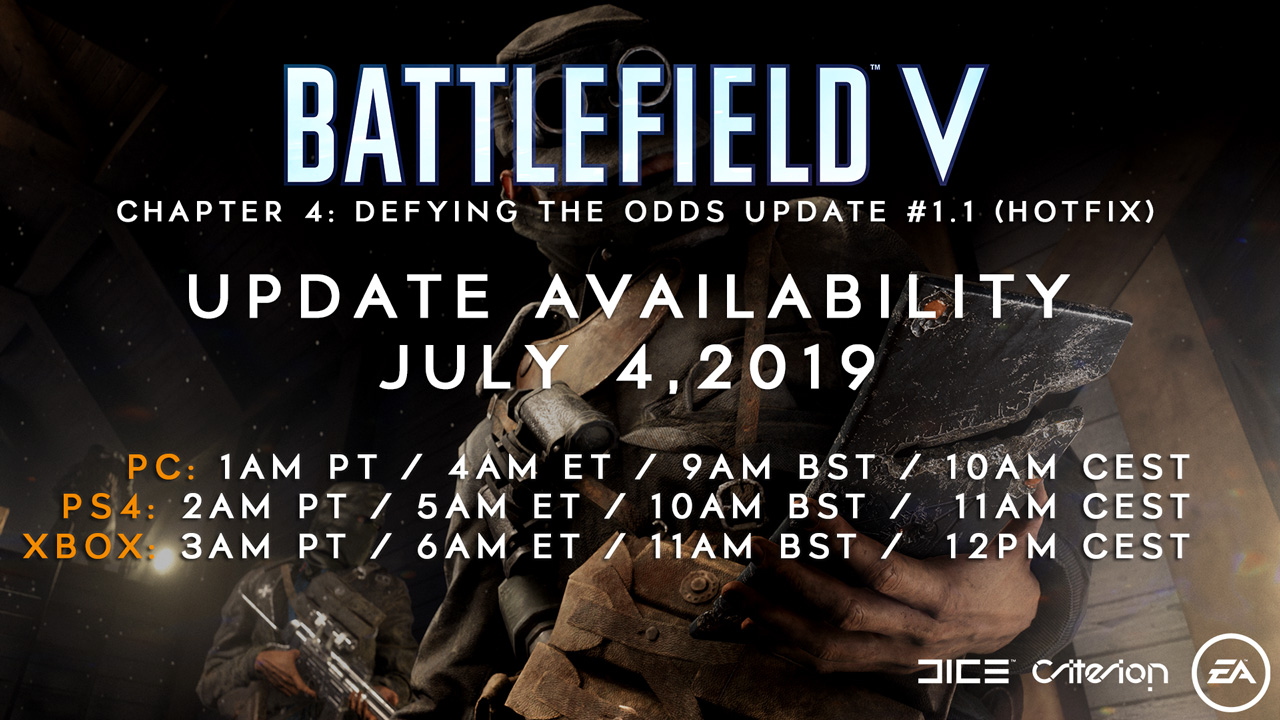 As always, we value your input, and we want you to reach out to us with feedback. For general feedback, please use our Battlefield V section on the Battlefield forums.
Should you encounter any issues or bugs we recommend that you report them on our Battlefield V – Answers HQ forum.
You can also reach out to our Battlefield multiplayer producer David Sirland and Battlefield LIVE producer Jaqub Ajmal on Twitter if you have any further topics that you would like us to write about in future blog posts.
You can reach them on Twitter @tiggr_ and @jaqubajmal. Also, you can reach Jaqub on Weibo: @jaqub.
Post edited by PartWelsh on July 2019
12
Reply to this topic
Sign In or Register to comment.