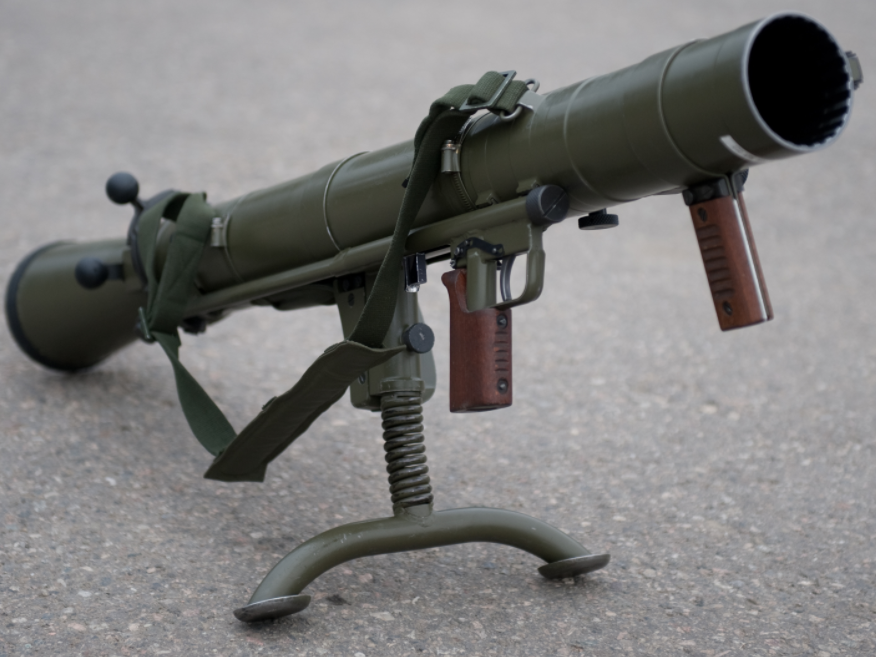 During the Second World War, the need for a anti-tank weapon system became apparent to practically all nations in the war, thereamong Sweden. During the conflict, Sweden developed a 20mm anti-tank recoilless rifle called Pansarvärnsgevär fm/42. As the war progressed, and thickness of armor with it, the fm/42 was made mostly obsolete and development on a replacement began around 1946 by a small team of engineers at the Carl Gustaf Stads Gevärsfaktori. This project would produce the Carl Gustaf M1 84mm recoilless rifle which was adopted into Swedish service in 1948 as the Granatgevär m/48.

The Granatgevär m/48, like it's predecessor the Pvg fm/42, used a Venturi recoil damper to effectively eliminate the recoil of the weapon system. The Grg m/48, like all its subsequent models, is a breech-loaded system and built to be a crew-served weapon operated by two people; a gunner and a loader. The team would in most cases carry 4 rounds of ammunition for the weapon, carried by the loader (obviously).

Unlike other recoilless rifle designs of the time, the Grg m/48 uses a rifled barrel for stabilisation rather than fins like on other systems.

The m/48B model is an improved version of the m/48 introduced in 1964 and quickly replaced the standard m/48 in service among its operators. I have been unable to find any specifics on what the differences are exactly.

The m/48C model is a further improvement upon the m/48 system where the rifling has been changed from a uniform rifling to a progressive rifling.

In ca. 1986, a new version of the Granatgevär system was introduced into Swedish service as the Granatgevär m/86. The weight was reduced significantly by using a carbon fibre wrapped around a steel liner at the cost of durability. The system was also shortened slightly from 1130mm to 1065mm. This reduced the weight from 14kg to just over 9kg. The m/86 is very similar in handling to the m/48 but with the addition of a built-in carryhandle.

The only difference between the m/86 and m/86B systems is that the m/86B barrel is produced later and in compliance with a different blueprint.

The m/86C model uses a different attachment method for the iron sights and has gotten rid of the small "blast shield" under the muzzle present on the other m/86 variants.

Granatgevär 18 in international terms is the Carl Gustaf M4, a shorter (950mm) and further lightened (6.6kg) variant that has traded a lot of the old carbon fibre components not relevant to the reliability of the platform for plastics. The steel liner was also replaced by a titanium liner. Other improvements include a new Venturi design and improved ergonomics achieved by the addition of picatinny rails.

Practically all kinds of ammunition exists for the Granatgevär-family of weapon systems, including, though not limited to:

All variants of the Granatgevär systems have integrated iron sights, but are commonly equipped with either a 3x telescopic sight, or in more recent years, a red-dot sight or red-dot sight with integrated rangefinder.

Being a recoilless rifle, the weapon system has a overpressure and blast zone behind the system when firing, personnel located in this danger area when the system fires may sustain blast and/or burn injuries. It is also not uncommon for the operator to sustain shock wave injuries, as a result, in peace-time it is most often prohibited for a single person to fire more than 6 rounds.

The Granatgevär-family of launchers have seen widespread use since it's initial adoption by the Swedish military in 1948, current operators include the United States, Norway, Germany (limited), and of course Sweden.