Edit - Today we've delivered Hotfix 4.6.1 to address the Disconnect issue experienced by Xbox players since the launch of Update 4.6. This is live for all platforms as we also needed to make background adjustments to unreleased content. This update will download automatically the next time you load Battlefield V. There are no other fixes or changes delivered as part of this Hotfix. Original Update Notes for 4.6 are below.

In our 4.6 update, we’re delivering fixes and improvements across the Battlefield experience, alongside big changes to the icons we use to help players gain awareness of nearby Health/Ammo/Repair opportunities, further changes to Prone Gameplay as advertised last month, and more balance changes for weapons - including a specific focus on Pistols.

We’re also pleased to say that Al Sundan will be made available on Conquest and Breakthrough shortly after the release of this update, and that with this patch we’re delivering the base files for Operation Underground in preparation for its launch in October.

This update also rectifies the display issues related to latency, fixes the issues with loot in Firestorm, and improves the responsiveness of Revives across both Battlefield V Multiplayer, and Firestorm.

Our full update notes are below - see you on the Battlefield.

With this months update, we’re delivering further changes that focus on adjusting the behaviour of players who are firing when Prone, as well as a balance pass on Sidearms. We have increased the damage to make them more attractive gameplay options, instead of only being used as close range finishers. With the exception of the Mark VI Revolver, Pistols are now generally better options for distances beyond 12 m.

For this update, we’ve invested energy into improving the readable information displayed to you on the screen during gameplay, and looked to ensure that you’re better aware of places and players nearby that can be of support to you, or are in need of your assistance.

As a non-medic, when low on health or when requesting health (through comrose or “spotting” a friendly medic player):

As a non-support, when low on ammo or when requesting ammo (through comrose or “spotting” a friendly support player):

When low on Vehicle health or when requesting repairs (through comrose or “spotting” a friendly support player):

As a support (owning the repair tool):

What’s being worked on for Chapter 5? 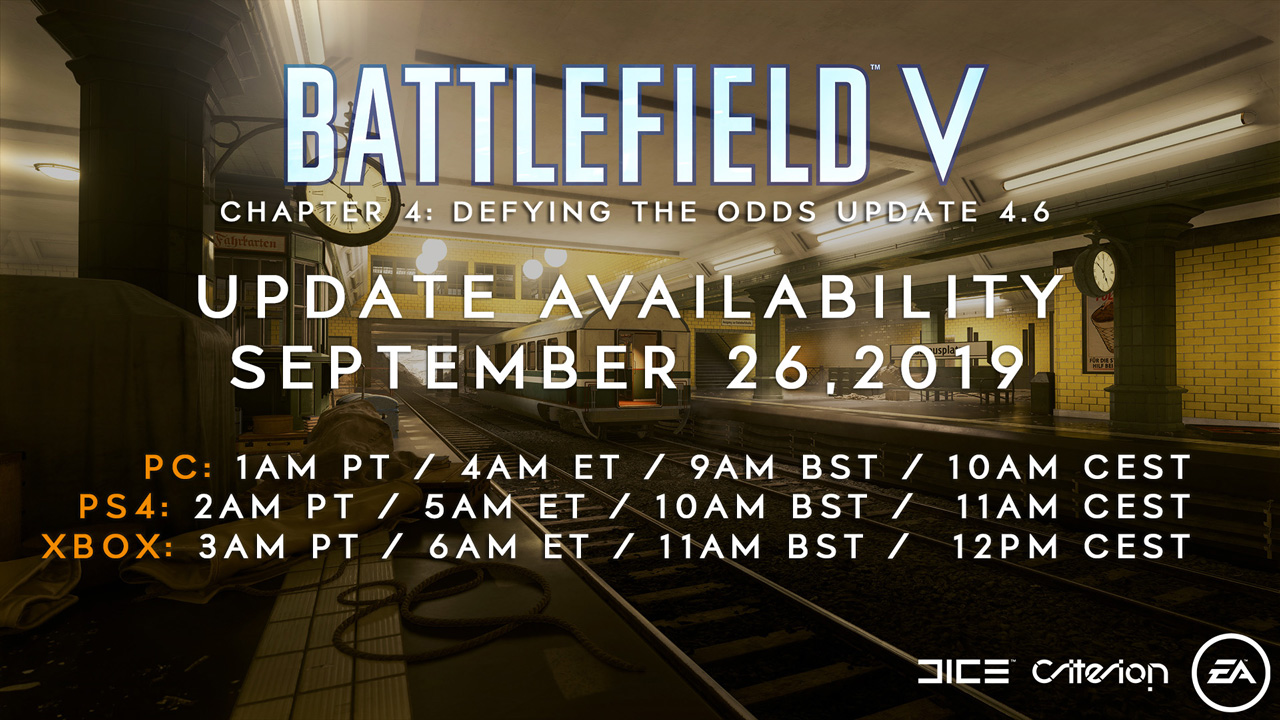 Should you encounter any issues or bugs we recommend that you report them on our Battlefield V – Answers HQ forum.  You can also reach out to our Battlefield Community Managers on Twitter if you have any further topics that you would like us to write about in future blog posts.